Porto Azzurro, a town that fully experienced the dominion of the Spanish, was once known as “Porto Longone” and later changed its name to “Porto Azzurro” which, by virtue of its colour, better suited the small village than the old name that was long associated with the Prison or “Casa di Pena”, as it was known at the time. The traces of the Spanish are immediately visible as soon as you reach the town, thanks to the imposing Forte di San Giacomo, dating back to the early 1600s, which lies at the top of the village’s promontory. The town has 3760 inhabitants and is a popular tourist destination for celebrities and tourists from all over the world, many of whom have decided to buy property and settle here.

The heart of the town is the main square, which was recently rebuilt and which, bathed in sunlight all day long, enjoys a beautiful view of the large bay where boats and yachts from around the world make their summer home. The town seems more like a small, picturesque village, with its traditional quarters and streets. The promenade stretching along Via Vitaliani and the quayside, Banchina IV Novembre, where there are restaurants, hotels, shops and the “Marina di Porto Azzurro” port offices, lead to the new seafront, Paride Adami, where the travel agency Longone Viaggi is situated. 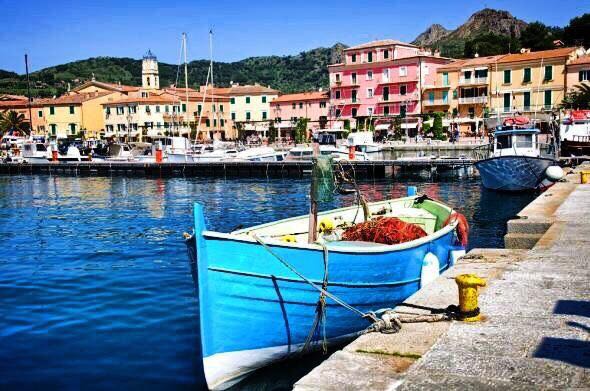 What to visit and do in your free time in Porto Azzurro:

SUMMER EVENING MARKETS:
Walking through the town you can browse the many and varied stalls lining the streets, admire handmade jewellery and local artists as they create their works of art. Twice a month along the seafront Paride Adami, in addition to the traditional stalls, there is also the “evening market under the stars”.

FLOWER FESTIVAL:
On the occasion of the annual flower festival, with the arrival of the summer season, the town is tinged with colour and fragrances thanks to the countless floral creations on display. It is a historical re-enactment of the landing of Paolina Bonaparte, who arrived by sailing ship in the old port of “Porto Longone”. The day includes historical parade with period costumes.

SAN GIACOMO 25 JULY – THE FISHERMEN’S FESTIVAL
To honour the patron saint of Porto Azzurro, San Giacomo, the townsfolk traders and associations organise the traditional “Festa del Pescatore”. The village is transformed into an ancient maritime village with decorations and food stands with inviting fragrances in the streets of the town and there is also the period costume re-enactment of the life of the patron.

NOTTE AZZURRA AGOSTO – AUGUST BLUE NIGHT
The town parties late into night in the hottest month of the year. The municipality in collaboration with local businesses organises a variety of events with entertainment for everyone and live music until late. The main square turns into a large open-air discotheque from dusk to dawn.

MONSERRATO HISTORICAL COMMEMORATION 8 – 9 SEPTEMBER
Every year, by tradition, on the occasion of the celebrations of the Madonna di Monserrato, a solemn religious procession takes place at sunset, with the starting point being the “Pinone secolare” (centuries-old pine) until reaching the sanctuary of the Madonna of Monserrato. The following day, a historical re-enactment in 17th century Spanish costume, organised by the cultural association “Tercio de Longone”, takes place in the evening. The parade accompanies the painting of the Madonna di Monserrato along the main streets of the town and reaches the central square where the arrival of the Spanish governor is evoked. Games, combat and dances of the era are held in commemoration.